This August in Pebble Beach Gooding & Co. will offer the 1948 Alfa Romeo 6C 2500 Sport Corsa Competizione.  Only three of these cars were built, all designed and hand made by the Alfa Romeo racing department.  The cars all had storied Mille Miglia histories racing between 1948 and 1951–the first car built, S/N 920001, crashed and was later rebuilt with a new body; the second car, S/N 920002, came in third in the 1949 race with driver Franco Rol behind the wheel; the third car, S/N 920003, crashed during the 1950 race and was a total loss.

This car was the second car built (#002) and is the only one remaining with its original body work.  It was discovered in 1983 in a bad state having been left to rot in a graveyard of cars outside of Paris.  The car was restored in 1984.

S/N 920002 is important not just because of rarity, though one would be hard pressed to argue that is not a key factor.  This car has an extensive racing history in period having raced in the Mille Miglia four times as well as the Targa Florio three times (where it came in second overall in 1949, third in 1950, and fifth in 1951).  It also raced a number of other times in period with several outright wins.  This competition history is important because it means the car is eligible for many of the important historic racing events held around the world.  Not every classic car is allowed entry to some of the more exciting events so the purchase of a car such as this is a Golden Ticket of a sort…if Golden Tickets also required that you spend hundreds of thousands of dollars on international transportation fees, entry fees, keeping mechanics on your payroll, and the many other costs associated with such an expensive hobby.  (Insurance alone for a simple twenty minute historics track lap can run $10,000.) 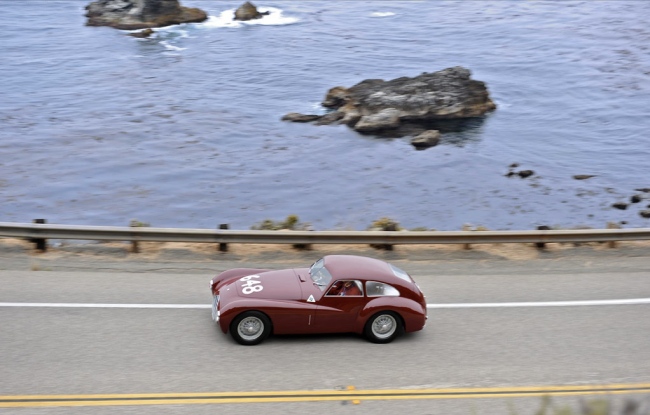 The Alfa Romeo 6C 2500 was a very special series of cars to begin with and having a rare Competizione model just sweetens the deal.  While some angles make the car look really special there are a few that let it down for sure; although that could probably be overlooked given the rarity of this machine.  The no doubt seven figure price someone will pay in August for the car will be well worth it for those collectors who cherish racing history and/or just love a good Alfa.  What true petrolhead doesn’t?